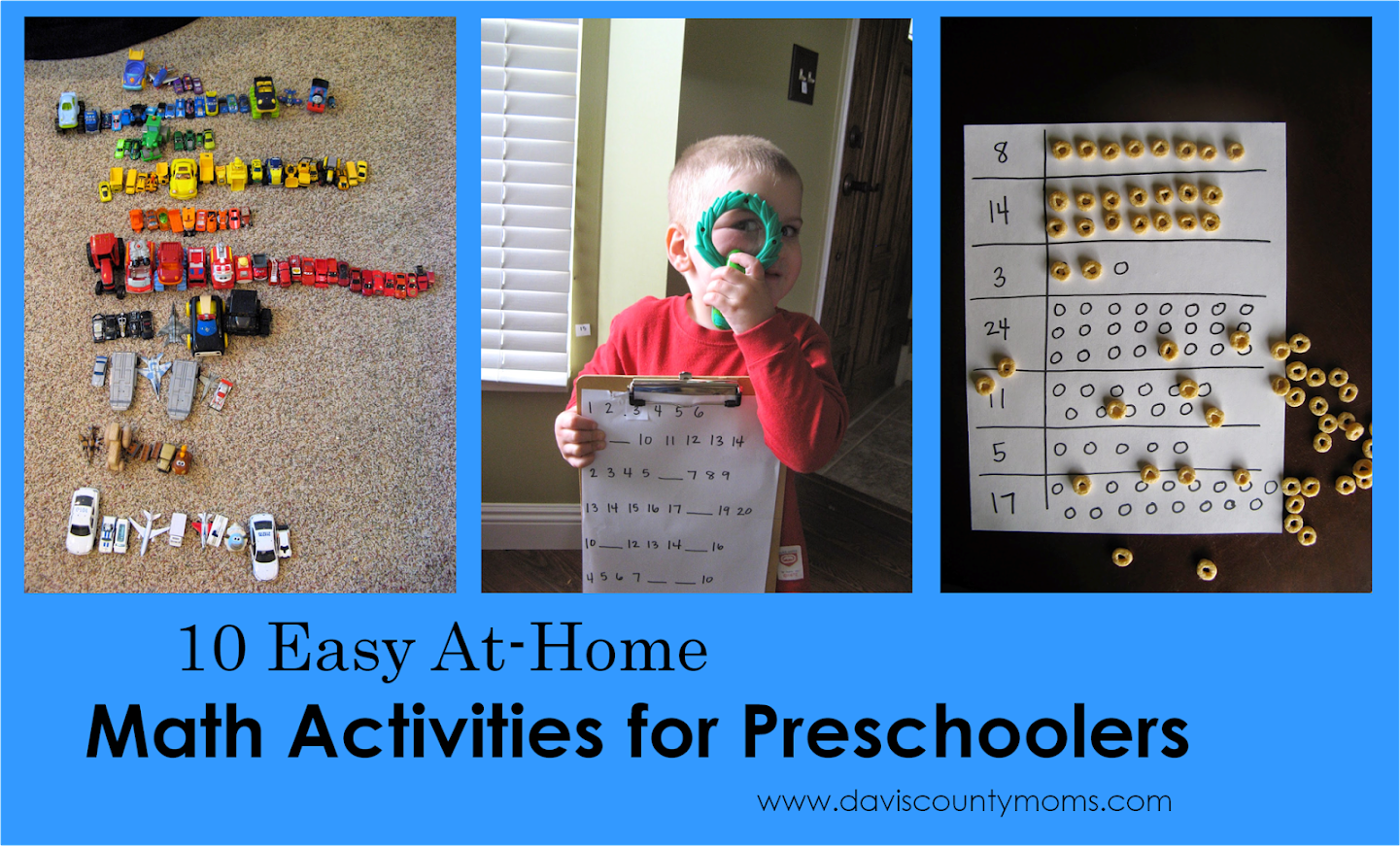 When you think in terms of patterns, sorting, and estimating, there are lots of fun math activities to do with preschoolers in addition to counting games! Below are some we’ve enjoyed–once again, these are mostly designed to be easily adaptable to different ages.

When a very long piece of butcher paper came in a package of diapers, we thought it was perfect for this activity. I spread it on the floor and wrote each number from 1-10 on it. I then sent my son on a scavenger hunt around the house to collect different items and line them up above their corresponding number.

If you do a Google search for “play dough mats,” you will find many, many options, or you could make your own. I simply printed my sheets on cardstock and laminated them. I liked having the number itself the kids could form out of play-dough as well as corresponding number of dots they could fill in.

Simple wooden blocks are a great resource to introduce patterns. We lined up groups of blocks and I explained the pattern. I then asked my son to continue the pattern by finding appropriate blocks and adding to the line. He enjoyed the activity, and it gave him a good grasp of patterns that has carried over into his daily activities.

With 3 little boys, we have about a gazillion toy cars. It’s been a fun activity to sort them by color!

My boys love suspense and adventure. For this activity, I equipped them each with a clipboard and a magnifying glass. Clipped on each clipboard was a paper with sequences of numbers with blanks in them. I had cut the missing numbers out of a separate piece of paper and taped them around our living room for them to find and fill in the blanks. I told them a story about a bad guy who loved numbers and stole a bag of numbers from the number factory, and how when the police caught him he spilled the bag of numbers and they needed our help to find them all. For my 5-year-old, I did number sequences up to 100 to make it more challenging for him. Both boys enjoyed hunting down their missing numbers!

This is a simple activity, great for younger kids, where you can write different numbers on the left-hand column and draw a corresponding number of circles on the right side. Then, kids can line up cheerios (or other small objects) and count them. It’s great practice for fine-motor skills as well!

For this activity, I cut out a bunch of slips of paper with instructions such as “hop like a frog forward 3 times,” “take one step back,” or “take 5 baby steps forward.” The boys were racing to get to the finish line and would draw out papers to find out what they could do. It was a great way to associate numbers with actions! I suggest putting at least twice as many forward actions as backward, as the kids got frustrated when they had a hard time getting to their goal!

To make a set of colored pasta, pour different pasta shapes into bowls and cover them with vinegar or rubbing alcohol. Add a few drops of food coloring and let them sit at least 8 hours. Then drain and let them dry. The different shapes are fun to sort by color or shape and can also be used for crafts.

This was such a fun way to add some thought to our snack time. I filled 5 small bowls with different amounts of different snack foods. I had my boys guess how many of each item were in the bowls, and we recorded their guesses on a simple chart I made before counting to reveal the actual answer. They became closer in their guesses with each food which showed me they were improving their estimation skills! And my 5-year-old would determine which of the guesses was closer to the actual number to add another dimension to the activity for him.

For this activity, I drew dotted-line numbers for my 3-year-old to trace (my 5-year-old could write the numbers on his own) and then we cut arrows out of cardstock and attached them to paper plates with brads to practice telling time. My boys were so proud of their homemade clocks!

What are your favorite math activities for small children?